Join the Army as a Dental Nurse

This month’s Crowning Careers spotlight is on Lance corporal La-Toya Vernon who talks about the job opportunities available in the Army.

My career as a Dental Nurse started in December 2008 after successfully completing the first stage of training to join the British Army. I completed the second stage for trade training which included a 14-week course comprising nine weeks of theory and some practical classes, ending with a four-week placement in a Tri-Service dental centre to put the theory into practice. Once I had completed the 14-week course I was assigned to my first dental centre in February 2009 where I worked for two years and completed the NEBDN qualification, gaining my National Diploma as a Dental Nurse in May 2010.

I served a little over five years in the Royal Army Dental Corps (RADC), working all over the country in Tri-Service dental centres. I have worked with numerous dentists and dental care professionals (both military and civilian), learning something from each of them along the way. I gained the competencies to apply fluoride and take impressions, I mentored three trainee dental nurses and became a practice manager of a three chair centre. The change in my job role from Dental Nurse to Practice Manager made me consider my career in the Military, I enjoyed dental nursing and didn’t feel I had experienced enough before entering the administrative role of a Practice Manager.

I then left the Army in November 2013 and worked in a private practice for six months. The transition from Military to civilian work was harder than I expected. The appointment times were shorter, the clinical hours longer and the pay was less. I was now working for a business that charged patients for their treatment and I found it hard to treat patients for what they could afford and not always for what they required. In the Military we complete all treatments required to ensure patients were dentally fit to maintain their daily job roles and deploy on operations.

Shortly after I worked for a dental agency that allocated clinicians to the Ministry of Defence giving me the best of both worlds. I worked part-time in a private practice with an implant specialist at a denture clinic run by a Clinical Dental Technician and his team, who were also Ex-Army. I had now been out of the Army for over three years and felt I needed a new challenge. I was keen to complete some more courses and found I was lacking the support and encouragement I was used to in the Army when interested in something new. I found I had become bored with my routine of work, I wanted something that would push me to continue to progress with my career and maintain high standards. A friend mentioned I should re-join the Army and having experienced both sides of dental nursing and knowing the future opportunities available to me, I re-joined the RADC in May 2017.

Since then I have held my own clinics for Fluoride application, Impressions and Oral Health advice, given oral health briefs to young soldiers new into service, completed the NEBDN Intravenous Sedation Nursing qualification and mentored two trainee Dental Nurses.

Outside of my clinical role I help mentor three Military Dental Nurses who are junior to me and I am responsible for the equipment within this and four other dental centres. I keep up to date with my fitness and military basic skills and I also represent the RADC and the Army Medical Services for Netball. I am due to move on to my next assignment with the Army later this year where I will be working with an outreach team talking to young people about the job roles and opportunities that are available within the Military. I have been a Dental Nurse for 10 years and had the luxury of working in different locations, experienced different types of dental care and worked in many roles. I have enjoyed my career both in the Military and civilian practice, the Military gives me the challenges I enjoy to make my day job that little bit more interesting, meeting different people along the way and rewarding the hard work I put in. 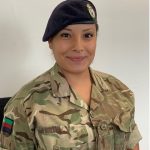